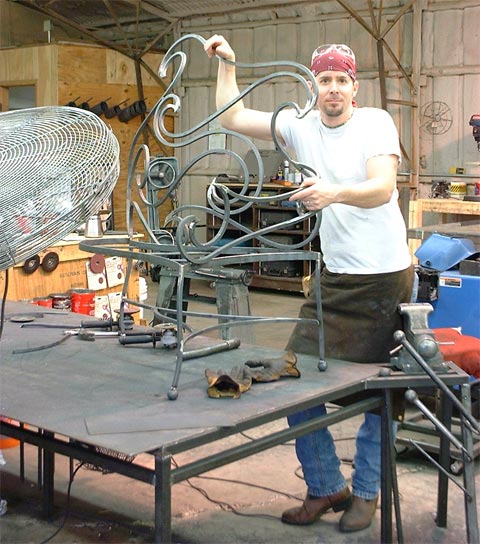 Patrick Neuwirth has been honing his skills as an artist for the better part of ten years. While his resume' does not include a long list of prestigious academic studies in the design field, his whimsical approach to the rigid structure and flowing form has been well received in art galleries and furniture stores alike. But the road to the Iron Chinchilla was a bumpy one, to say the least. After graduating High School in the Midwest metropolis known as Des Moines, Iowa, Patrick took a welding job as an ironworker in the field of security installations. He quickly developed a love for working with steel and an appreciation for the versatility and boundless design energy the material presents. Slowly his creative nature began to take over and he soon found himself staying late at work, digging through scrap bins for the sole purpose of bending and welding channel iron and re-bar into unique creations that personified the “beauty in the eye of the beholder” philosophy. Thankfully, time and tenacity are wonderful teachers, and his creations quickly began to take on a more recognizable appearance. Patrick's unique view of furniture design first received acclaim in 1993 when he was commissioned to design and fabricate thirty dining tables for the chic Chinese restaurant where he worked as a bartender. The response to his literally “twisted” design was so encouraging, it was only a matter of time before he was turning in his two-week notice at his day job and diving full-time into the furniture design business. He titled his venture Zero Tolerance, meaning “no deviation from a set standard”, and those standards were to be set by his imagination. Zero Tolerance began in the spring of 1994, lasted about nine months, and proved to be a very fruitful experience. Granted, the fruit was more educational than monetary. However, Patrick's designs found homes in a trendy pizza joint, a punk rock nightclub, and an architectural firm, not to mention numerous private collectors. He received critical acclaim in several gallery shows throughout the Midwest in that short time and even graced the pages of Country Home magazine. Sadly, in January of 1995 Zero tolerance folded, leaving Patrick with a taste of what was to come. After relocating to the Dallas area in July of 1995, Patrick continued to design on a much smaller scale, filling gift shops and specialty boutiques with some of the most bizarre candle holders and picture frames they had ever seen. He continued to scratch his designing itch in this small way for several years. However, waiting tables, a short-lived shot as a restaurant manager, and a very persuasive wife got the best of him, and he began to design again in the fall of 2000. In April 2001, Patrick began brainstorming on ideas for a Functional Art Studio. The Iron Chinchilla became a reality in June 2001 and continues to be forever dedicated to expanding the parameters of furniture. Patrick currently lives in the Ft. Worth suburb, Keller, Texas with his wife Tina their three children, dogs and cats. His other interests include volunteering at his church and playing the guitar.

View the art of Iron Chinchilla